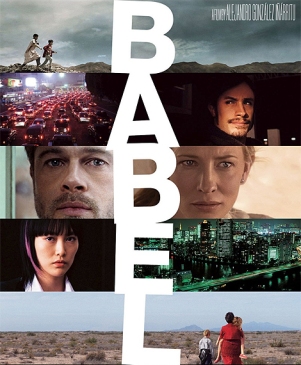 Alejandro González Iñárritu’s film Babel takes place over five days, spanning four countries, and the interlacing lives and events that connect them. Made in 2006, the plot weaves between contemporary Morocco, Mexico, America and Japan. Five years post 9/11, tensions are high over “terrorist attacks” and illegally acquired weapons. The film is an intricate mosaic – its texture is dry, faded, its colours washed; but its many pieces, both places and people, are vibrant, intense and create a spectacular pattern. The plethora of perspectives (of different countries, cultures, classes, ages, languages) and extreme opposites of circumstance offer an astoundingly real kaleidoscope of humanity – if not an entirely real slice of ‘average’ daily life. The timeframe is non-linear, though criss-crosses logically between the characters’ lives, serving to create a multi-dimensional understanding of, and thus empathy with, each one’s situation and decisions.

The action jumps between a rural Moroccan family – specifically the two young sons Yussef and Ahmed – whose father Abdullah purchases a gun for protecting their livestock from jackals. The seller, Hassan, originally acquired the rifle as a gift from a visiting Japanese businessman/huntsman. Yasujiro has since returned to Japan and Chieko, his deaf-mute teenage daughter, who is struggling to process her mother’s recent suicide. Her knotted feelings are exacerbated, as she discovered her mother with a gunshot to the head. Chieko’s anger, frustration, devastating sadness and isolation manifest into sexually promiscuous behaviour, which increasingly leaves the wounded girl more vulnerable and reactive than ever. Her actions climax when she appears naked in front of an officer investigating the rifle’s origins, propositioning the stranger – though his reaction is delicate.

Now vacationing in Morocco are Richard and Susan Jones, desperately trying to reconnect after the death of their baby. Susan is shot unexpectedly; Yussef and Ahmed want to test the new rifle’s range and bet on who can hit the travelling tour-bus. The guide, Anwar, aids Susan by taking her to his village, the nearest thing to a doctor, and the calming withered medicine woman. A terrified and infuriated Richard meanwhile battles the tour-group (who eventually abandon them in an unknown location), and the American embassy (who delay in sending medical help due to protocol and politics). The shooting gets international coverage as a suspected “terrorist attack.” Moroccan agents finally corner Abdullah and his sons. A shoot-out ensues and Ahmed is killed in the crossfire – devastated, Yussef smashes the gun and surrenders.

While the Jones’ return to America safely and Susan undergoes surgery, their young children are being tended to by Amelia, their live-in housekeeper. It is her son’s wedding in Mexico, but the children’s aunt reneges on looking after them. Believing it the safest option, Amelia brings Debbie and Mike with her. Upon their return, her intoxicated nephew annoys the authorities, runs the border and abandons the three in the desert. Amelia risks her life looking for help for the children that she has, in essence, raised (significantly symbolically, they understand Spanish). They are finally found by police, but Amelia is arrested, reprimanded for her apparent negligence with minors in her care, and deported due to being an illegal immigrant.

The film takes its title from the Biblical myth of the Tower of Babel – where God, fearing what man could accomplish when unified, confused the languages so that we may never truly understand each other. The film draws on this in multiple ways – symbolically by its representation of various languages; as well as the gaps of understanding between people’s radically different situations. The dynamic of the parallel stories created an interesting tension for me – I did not personally relate with the superficial circumstances of any of the characters, yet I identified with their emotions and motives, their reasoning behind their random actions. For example, Chieko’s sexual outbursts (including suddenly exposing herself to strangers in a packed restaurant, licking her dentists nose and shoving his hand into her crotch) are shown to be desperate cries for attention fuelled by a craving for validation, not simply unacceptably forward and ‘slutty’ behaviour. Every character is empathised with, placed within a context serving to explain their seemingly absurd actions rather than judge them.

Babel is reminiscent of a more globally inclusive and politically aware Crash. In a similar vein, we are invited to understand each character beyond cultural and language barriers – that we are all human, make mistakes, and essentially all seek the same things: to be understood, accepted, loved and respected. Though fundamentally united in these things, as in the biblical story we are instead divided. Racism, stereotyping, miscommunication, and the fragility of the human condition are extensively explored themes. Also similarly to Crash, the points of catharsis are those of connection: witnessing Amelia’s motherly love and tender interactions with the Jones children; the final scene of Yasurijo consoling his broken daughter, baring herself nakedly and thus being receptive to total acceptance; and where Richard lovingly helps Susan with something private (wetting herself and needing his hands-on help to urinate), and we witness the compassion and healing they have desperately searched for unfold in this tender and personal moment of vulnerability. Police forces form a strong motif, intervening in each story, though portrayed in differing lights. It is negative in Morocco – where they unnecessarily intimidate vulnerable victims with violence, and cause the only death in the film. The American embassy initially appears unhelpful towards Richard, but the monitoring of the USA/Mexico border is shown to be effective, though bristling with racial tension and language barriers. After the ordeal however, Amelia receives no understanding towards her plight and is unquestionably and immediately deported from her life of the past sixteen years; denied her request to even see or say goodbye to the children and again illustrating the hindrances of language.

Though the Japanese link may seem rather tenuous and disassociated from the connections of the other sub-plots, the film would arguably not have as effective an impact without it. Strangely, it seemed to link the other stories back into contemporary reality for me, portraying the most relatable depiction of modern-day life – the constant communication yet isolation; feeling limited and frustrated in a limitless world; the wonder of the capabilities of man’s technological advances, yet our problems and feelings essentially being rooted in something primal, a human essence we all share. The film is multi-layered in its representation of our human need to connect – most clearly illustrated by Chieko. Beyond sensory isolation, she struggles to convey her pain regarding her mother’s recent suicide. This desperation to be understood and consoled is manifested as rash and frequently sexual outbursts. Despite her concerning behaviour, the closing scene of the film is one of raw hope. Completely nude and standing in the night breeze, Chieko breaks down her barriers; bearing her true self to her father and in so doing, becomes receptive to acceptance and thus healing. As Yasurijo comforts his broken daughter, the camera pans out and they are engulfed by the innumerable lights of Japan’s immense cityscape. It is a humbling contrast to depict – that each diverse and entire personality, each vast and far-reaching life is also a little window – that each light has a whole world behind it.

I found a strong undercurrent to be the chaos theory of the butterfly effect – a butterfly flaps its wings and causes a tornado in another continent. The film expertly plays on this notion, and that the chaos of life demands a ‘formula’ as unpredictable and unfathomable as existence itself. Each character makes spontaneous decisions believing them to be the ‘right’ ones in the given situation. Yet each ‘minor’ or ‘insignificant’ decision incurs severe repercussions. Whether we intend them to or not, our actions have implications beyond our control, conception or comprehension – for example, neither Yasujiro, Hassan, nor Abdullah can ultimately influence or stop Yussef and Ahmed from messing around with the gun; they cannot foresee the far-reaching repercussions, thus cannot comprehend how many lives such a ‘small’ and spontaneous act will cause. Babel is a difficult film – not typically uplifting, but ultimately filled with hope. It illustrates how powerless we are in the uncontrollable torrent of life, but how we can find saving rafts in each other and unexpected places – differences as well as words are meaningless in the simple smiling face of empathy. As the by-line advises: “If you want to be understood, listen.”

Editor and writer. Interested in tiny things, nineties nostalgia, old jungle mixtapes, my little homestead, and my cats. Not to be fed after midnight.

An alternative agent for your health

Best enjoyed with a cup of tea

Soul Of A Scribe

A Peek Into My Thoughts & Writings

self discovery is a constant pilgrimage.. have a travellers faith with me

~ Whatever Lights Your Fire ~